Ali (Arabic: علي ابن أبي طالب‎, romanized: `Alī ibn Abī Ṭālib) was a cousin of Muhammad. He was the second companion of Muhammad after Khadijah to accept Islam. He was only 10 years old at the time of his conversion. At the age of 21, he married Fatimah, Muhammed’s youngest daughter by Khadijah bint Khuwaylid, and became a son-in-law of Muhammed. He had three sons (Hasan, Husayn, and Muhsin) and two daughters (Umm Kulthumand Zaynab) with Fatimah. He was a scribe of the Quran, who kept a written copy of it, and memorized its verses as soon as they were revealed. During the Khilafat (Arabic: خِـلَافَـة‎, Caliphate) of Uthman, Umar and Abu Bakr, he was part of the Majlis ash-Shura (Arabic: مَـجْـلِـس الـشُّـوْرَى‎) and took care of Medina in their absence.[citation needed]

After the death of Uthman, Medina was in political chaos for a number of days. After four days, when the rebels who assassinated Uthman felt that it was necessary that a new Khalifa should be elected before they left Medina, Many of the companions approached Ali to take the role of caliph, which he refused to do initially.[citation needed] The rebels then offered Khilafat to Talha and Zubair, who also refused. The Ansars also declined their offer to choose a new Khalifah. Thus, the rebels threatened to take drastic measures if a new Khalifah was not chosen within 24 hours. To resolve the issue, all Muslim leaders gathered at the mosque of the Prophet. They all agreed that the best person who fit all the qualities of a Caliph was Ali. Therefore, Ali was persuaded into taking the post. Talha and Zubair and some others then performed Bayʿah (Arabic: بَـيْـعَـة‎, Oath of allegiance, literally a “sale” or “commercial transaction”) at Ali’s hand, followed by a general Bayʿah on 25th of Dhil-Hijjah, 656 CE.

After his appointment as caliph, Ali dismissed several provincial governors, some of whom were relatives of Uthman, and replaced them with trusted aides such as Malik al-Ashtar. Ali then transferred his capital from Medina to Kufa, the Muslim garrison city in what is now Iraq. The capital of the province of Syria, that is Damascus, was governed by Mu’awiyah, who was a kinsman of Uthman, Ali’s slain predecessor.[12]

His caliphate coincided with the First Fitna (civil war when Muslims were divided over who had the legitimate right to occupy the caliphate).[13] and which was ended, on the whole, by Mu’awiyah’s assumption of the caliphate.

Ali was assassinated, and died on the 21st of Ramadan in the city of Kufa (Iraq) in 661 CE by the Kharijite Abd-al-Rahman ibn Muljam. Ali’s son Hasan briefly succeeded as caliph before abdicating the caliphate in favour of Muawiyah I in order to end the civil war.

Ali’s father, Abu Talib, was the custodian of the Ka’bah and a sheikh of Banu Hashim, an important branch of the powerful Quraysh tribe. He was also an uncle of Muhammad, and had raised Muhammad after Abdul Muttalib (Abu Talib’s father and Muhammad’s grandfather) died.[23][24] Ali’s mother, Fatima bint Asad, also belonged to Banu Hashim, making Ali a descendant of Ismā’īl (Ishmael) the son of Ibrāhīm (Abraham).[25] Many sources, especially Shi’i ones, attest that Ali was born inside the Kaaba in the city of Mecca,[1][26] where he stayed with his mother for three days.[1][27] His mother reportedly felt the beginning of her labour pain while visiting the Kaaba and entered it where her son was born. Some Shia sources contain miraculous descriptions of the entrance of Ali’s mother into the Kaaba. Ali’s birth in the Kaaba is regarded as a unique event proving his “high spiritual station” among Shia, while Sunni scholars consider it a great, if not unique, distinction.[28]

According to a tradition, Muhammad was the first person whom Ali saw as he took the newborn in his hands. Muhammad named him Ali, meaning “the exalted one”. Muhammad had a close relationship with Ali’s parents. When Muhammad was orphaned and later lost his grandfather Abdul Muttalib, Ali’s father took him into his house.[1] Ali was born two or three years after Muhammad married Khadijah bint Khuwaylid.[29] When Ali was five years old, Muhammad took Ali into his home to raise him. Some historians say that this was because there was a famine in Mecca at the time and that Ali’s father had a large family to support; however, others point out that feeding Ali would not have been a burden on his father, as Ali was five years old at the time and, despite the famine, Ali’s father, who was financially well-off, was known for giving food to strangers if they were hungry.[30] While it is not disputed that Muhammad raised Ali, it was not due to any financial stress that Ali’s father was going through. 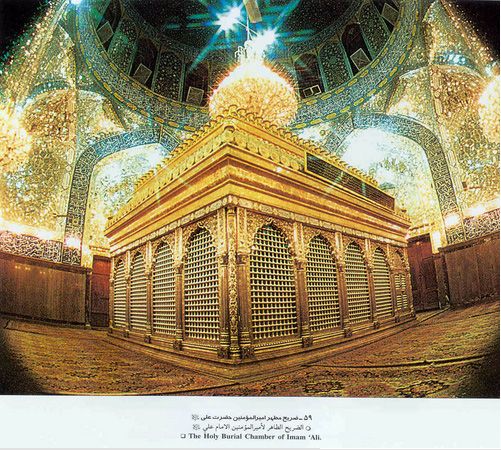