Creation of Skies and the Earth

Al-Quran mentions that the believers do ponder over the Universe around them which increases their faith in the Creator. The Creator is the original designer and maker of the Universe. As believers discover more and more about this Universe, their awe and appreciation for its splendor, its immaculate design and balance, its complexity  and its immense power, increases and they can appreciate more the absolute wisdom, knowledge and power of the Creator. The parameters of the Cosmos are so meticulously designed that even if one factor or physical property of the matter and energy had differed an iota, the whole Universe would have crashed. This extreme care to perfection leads the believers to believe that this is all by the design of the most intelligent being whom people of all religions call the Creator.

Those who remember Allah, standing, sitting, and lying on their sides, and ponder in the creation of the skies and the earth, (They say). “Our Lord! not for falsehood have you created (all) this! Glory to You! give us salvation from the punishment of the fire.

It is He, who created the skiess and the earth in Six periods of time, then He firmly established on the Throne (of Authority). He knows what enters within the earth and what comes forth out of it, what comes down from sky and what mounts up to it, and He is with you where-ever ye may be,  and Allah sees well all that ye do.

The scale of the Universe is simply enormous beyond the grasp of the normal comprehension. The deeper we look into the Universe the farther it extends. There are  places in Universe whose light has not reached as yet, while light has been travelling from there for more than 14 billions years and light travels at the speed of 300,000 Km per second.

He is who created the seven skies one above another. You will not see any imperfection in the creation of the Most Gracious. So turn your vision again. Do you see any flaw?

The above Ayat states that the seven skies that Allah has created are built one over the another.

We have indeed adorned the lower heaven with planets/stars,-

And We send down water from the sky according to a measure, and We cause it to soak in the soil; and We certainly are able to take it away (evaporation etc.)

The two Ayas above mention that the lowest sky is adorned with planets/starts. The water is sent down from sky. We may deduce that the lowest sky is the atmospheric layer of the earth as the atmospheric layer accumulates water vapors to form clouds and make rain on land. The layers of air also make the stars and planets look like glimmering lamps. And also it provides protection against ultra violet rays, radio activity and meteorites entering the earth.

And We have made the heavens, a protective roof,  yet do they turn away from its signs.

Another possibility is that the first sky is the whole universe and there are still 6 additional layers of skies above our cosmos which we are not yet able to see.

Allah is He, who created seven skies and of the earth also the like of it. His orders descends between them so that ye may know that Allah has power over all things, and that Allah encompasses, all things in (His) Knowledge

There is a similarity mentioned between the earth and the skies. The similarity is in their structure i.e as skies are built i.e one above another, similarly earth is made of layers one above another. The details of the layers of the Earth are given at the bottom of the post in notes.

By the Sky which is returning/bouncy, and by the Earth of opening/cracking nature

The nature of sky is stated to be returning or bouncy type, which could be pointing either to its cyclical nature (rotation), or it may mean its bouncing nature referring to the space time fabric of Universe. The Earth is said to be of opening/cracking nature, may be referring to the cracks which forms between the layers of earth which causes e.g eruptions of volcanoes.

It is He Who created the Night and the Day, and the sun and the moon. all (the celestial bodies) swim along, each in its rounded course.

The sun and moon were made to move in their orbits which made the night and day on earth.

Blessed is He, Who made structures in the skies, and placed therein a Lamp and a bright Moon.

And (He) made the moon, in which is light, and made the sun as a Lamp.

Sun is said to be a lamp, obviously because it burns fuel. The Ayat states that He made the Moon in which is light. We see light in the moon which is basically reflected light of the sun. In addition, moon’s inner most core comprising of iron and sulphur,  at a temperature of 1600-1700K, would have its own glow as well inside of moon (see in notes below)

What! Are you the more severe to create or the skies (above)? Which We have created. He raised its canopy high, thus perfected it. It’s night, He endowed with darkness, and its light He brings out. And the earth, after that He extended. He draw out therefrom its water and its pastures. And the mountains He firmly fixed.

In these Ayas, sequence of creation is mentioned. It is informed that He raised the canopy of the heavens high i.e the heavens were expanded. He brought forth the light of it, which means that the sun and stars were made to glow and with the expansion of the skies the darkness was distinct from the light of sun and starts. After that He spread out the earth. (Spreading out does not mean the Earth is flat, would mean He shaped the earth , i.e from very small size in the beginning when Earth and Skies were joined together, the Earth was spread to its present size, i.e to a size of much bigger sphere.). Then He brought forth its water and pastures and fixed mountains on Earth. It means the sequence of creations is that, Allah made first the sky and after that He shaped the Earth.

The Skies and Earth were all joined together in a mixture and then God separated them.

Do not the unbelievers see that the skies and the earth were joined together before We split them asunder We made from water every living thing. Will they not then believe?

Earth was created and shaped out of this mixture, in two periods of time.

Say. Is it that you deny Him who created the earth in two periods/intervals of time? And do you join equals with Him? He is the Lord of (all) the Worlds.

He sets on the (earth), mountains standing firm, above it, and bestowed blessings on it, and set measures/proportion therein for all things for their nourishment, in four periods/intervals of time, equal (time periods)for the (sake of) those who ask

The earth and sky were set in their motions.

Then He attended towards the sky, and it was smoke/gaseous. He said to it and to the earth. “Come you together, willingly or unwillingly.” Both said. “We do come (together), in willing obedience.”

So, after the sky was shaped, then earth was shaped and provisions on earth were created, and after that He created seven skies out of the sky in two periods of time.

So He completed them as seven skies in two periods/intervals of time, and He assigned/inspired to each sky its command. And We adorned the lower sky with lamps, and (provided it) with guard. Such is the Decree of (Him) the Exalted in Might, Full of Knowledge.

It is He who has created for you all things that are on earth; Then, He attended to the skies, thus made seven skies thereof; and He has knowledge of all things.

The sky, we constructed it with power and it is We who expand it

In the 20th century, the scientific community discovered that the Universe is expanding. All the galaxies are moving away from one another. This was against logic as scientists expected that galaxies should be moving closer to one another due to force of gravitation. Allah informs in this Ayat that it is He, who is expanding the Universe.

He it is Who created the skies and the earth in six time periods – and His Throne was over the water – that He may test you, which of you is better in conduct. But if you were to say to them, “You shall indeed be raised up after death”, the Unbelievers would be sure to say, “This is nothing but obvious sorcery!”

In the above Ayat it is mentioned that Allah created the skies and earth in six periods of time and His throne was on water in order to test you how you do you fare. This could be a reference to the to start of life in the Universe after creation of heavens and earth, eventually towards the development of humanity. Allah’s throne means his control, and this is with reference to the beginning of life which originated in water.

O ye assembly of Jinns and men! If it be ye can pass beyond the zones of the skies and the earth, pass ye! not without authority shall ye be able to pass!

The Day that We roll up the sky like a scroll rolled up for books. As We started the initial creation, so shall We repeat it. This is a promise upon us, truly shall We fulfil it.

This could be an indication that the Universe would end up in ‘BIG CRUNCH’, as the Universe expanded in the initial stages, eventually it could compress towards the end of time. (and may be this cycle keeps on repeating)

Structure of the Earth is divided into layers. These layers are both physically and chemically different. The Earth has an outer solid crust, a highly viscous mantle, a liquid outer core, and a solid inner core. (Following is the description of layers and sub layers of Earth): 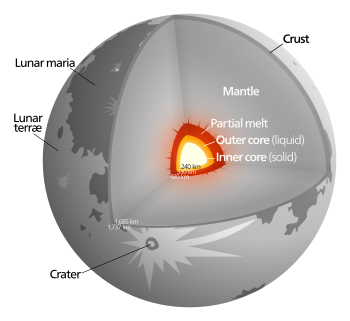 In 2010, a reanalysis of the old Apollo seismic data on the deep moonquakes using modern processing methods confirmed that the Moon has an iron rich core with a radius of 330 ± 20 km. The same reanalysis established that the solid inner core made of pure iron has the radius of 240 ± 10 km. The core is surrounded by the partially (10 to 30%) melted layer of the lower mantle with a radius of 480 ± 20 km (thickness ~150 km). These results imply that 40% of the core by volume has solidified. The density of the liquid outer core is about 5 g/cm3 and it could contain as much 6% sulfur by weight. The temperature in the core is probably about 1600–1700 K