TJ visits a village or neighborhood, invites the local Muslims to assemble in the mosque and present their message in the form of Six Principles. These six principles were derived from the lives of the companions of Muhammad. It is stated in one narration, “My Sahabah (companions) are like [guiding] stars, whosoever follows [any] one of them will be guided.”[25] Muhammad Ilyas articulated six demands in the form of Six Principles which are quintessential to Tablighi Jamaat’s teachings. These six principles are: 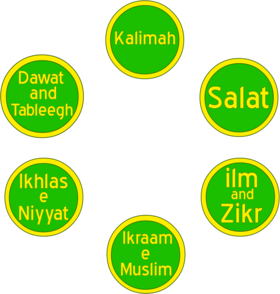