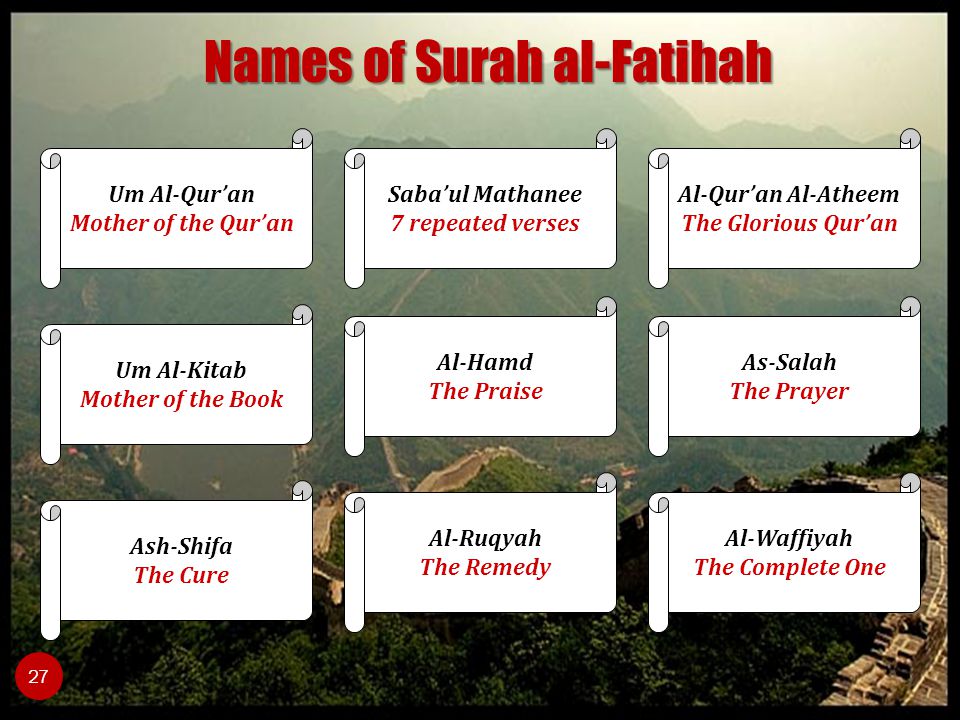 Islamic Art of Living is to learn and practice Quran

Al-Fatihah is not merely an introduction to Qur’an rather it is a du’a for seeking the Right Guidance and Qur’an is the reply of that du’a. A person asks His Creator for guidance, and in response to the person’s du’a Allah subhanahu wa ta’ala presents the entire Qur’an. As if to state, this is the guidance that you seek. Subhan’Allah!

Al-Fatihah is a prayer where we are being taught not to put forward our request bluntly and abruptly, but to begin by acknowledging the excellences, favors and the highest position of Allah subhanahu wa ta’ala. We should remember Who we are talking to for it is only He Who blesses us with countless bounties.

Therefore, we begin Al-Fatihah with the praise of Allah subhanahu wa ta’ala Who is the Lord and Creator of this world and the Hereafter.

When we say Al-humdulillah, here ‘AL’ means all or the entire hence meaning all praise is for Allah alone.

The word ‘Rabb’ stands for:

(a) Master and Owner,
(b) Sustainer, Provider and Guardian,
(c) Sovereign, Ruler, Administrator and Organizer.

Ar-Rahman and Ar-Raheem are two names derived from the same root Ar-Rahmah (the mercy). One of them is softer than the other, meaning, it carries more implications of mercy.

The name Ar-Rahman is exclusively for Allah encompassing every kind of mercy. Allah subhanahu wa ta’ala is Ar-Rahman for the entire creation regardless of what they believe in, whether they are evil doers or the righteous; they all receive their sustenance from Allah. On the other hand, the word ‘Ar-Raheem’ is exclusively for the believers. Those who believe in Allah subhanahu wa ta’ala receive special blessings from Him and they are the ones who are going to be happy and content in this life and in the Hereafter.

Just look at how Allah subhanahu wa ta’ala right in the beginning of the Qur’an has informed us that He is a Merciful Lord. He doesn’t want to punish people just like that rather He is Forgiving and Merciful. The condition to seek forgiveness or mercy is repentance. May Allah subhanahu wa ta’ala make us among those who seek repentance as soon as they realize they have done something wrong that might have displeased Him. Aameen.

[The Actions that Invite toward Repentance and Make Firm on It]

We must therefore not allow ourselves to be misled. We should always remember that we are accountable to Him. He is not unaware of what we do in dunya. On the Day of Judgment, He will gather entire mankind from Adam a’layhi salaam to the last child born and ask each of us to give an account of our actions. He has the power and right to pardon us or punish us. We should be constantly striving to please Him.

After the person has praised Allah and thanked Him, now he stands before Him, addressing Him directly; O’ Allah our worship, obedience, submission and devotion is for You alone, and we only serve You. O’ Allah we know that You are the Lord of the Universe and You have the power over everything, therefore, we only turn to You for help, for our needs and requirements.

By saying Iyyaka na’abudu wa’iyyaka nasta’aeen, we are acknowledging “You alone we worship and to You alone we pray for help.”

The word iyyaka means “My whole attention is only on You or You alone.”

The word na’abudu is derived from the Arabic word ‘Abd “Slave” (that is why the most beautiful name to Allah subhanahu wa ta’ala is ‘Abdullah meaning the slave of Allah) and “Na” in Arabic is used as a pronoun for We. So when we say na’abudu we are saying “We worship” hence Iyyaka na’abudu means “You alone we worship.”

Wa in Arabic is used for the English word “and” so when we add wa’iyyaka, we are saying “And to You alone.”

Nasta’aeen means to get help or to ask for help.

When we recite “Ihdina alssirata almustaqeem” we are asking Allah subhana wa ta’ala to “Guide us to the path that is straight.”

Siraat in Arabic means “the path”

We ask Allah subhanahu wa ta’ala to show us the right path and in response to that He opens up the entire Qur’an as if saying, “This is the straight path you’re seeking.” The straight path mentioned here and elsewhere in the Qur’an refers to Islam. We already mentioned the hadeeth in which the servant proclaims, ‘Guide us to The Right Way,’ and Allah says, “This is for My servant and My servant shall acquire what he has asked for.”

When we make such a prayer to our Rabb, how do can we be led astray? Can we still have doubt and uncertainty in our life when we have asked Allah subhanahu wa ta’ala to show us the Right Path? We can only get lost in labyrinths of doubt and uncertainty due to lack of true knowledge. Let us hold firm to the straight path that Allah subhanahu wa ta’ala  has opened up for us.

After asking Allah subhanahu wa ta’ala to show us the straight path and protect us from deviation, we become specific in our prayer.

From traditions we learn that those who have earned His wrath are those knew the Scripture; who had read in their Books about the coming of a Last Messenger and his description yet they concealed the truth.

Who have gone astray?

Those who are not in search of the truth. Those who have known what is right but their weaknesses have led them far away.

In the last ayah of this beautiful Surah there is a lesson for each one of us; anyone who knows the truth but hides it has earned Allah’s anger and anyone who is not in search of truth may go astray. We beseech Allah subhanahu wa ta’ala to save us from following the path of such a person (or nation). We don’t want that path Ya Allah, save us from treading in their footsteps. Aameen Ya Rabbil Alameen.

We have completed Surah Al-Fatihah alhumdulillah. Today, in the Salah when you recite Al-Fatihah read the Surah keeping its meaning in mind. Say it with a lot of passion, putting your heart into it and feel the difference. Recite it with full devotion and sincerity, pausing and reflecting at each ayah as you recite. Rasoolullah ﷺ and his Companions radhiAllahu ‘anhum used to weep for hours during the recitation of this Surah.

May Allah subhanahu wa ta’ala accept this humble service from us and join us with the righteous in this world and the next. Aameen